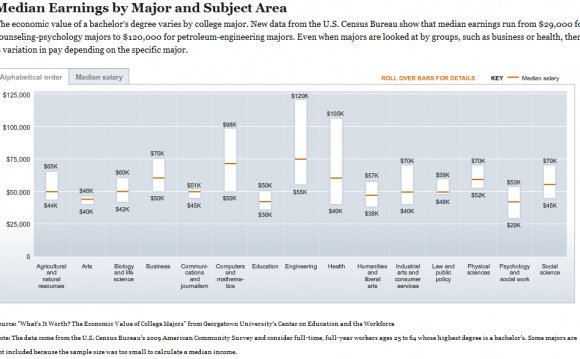 A Bachelor of Arts in environmental studies teaches students about global environmental problems and how to work toward future sustainability. The program focuses on areas of study such as ecosystem science, climate change and environmental governance. Graduates work in a variety of environmental-related fields such as solid waste management, forestry and outdoor recreation. Environmental scientists and specialists make about $63, 570 on average yearly. However, this figure varies according to the precise field an environmental studies graduate chooses.

Urban planning is one possible field for environmental studies grads. Urban planners create programs for land use in order to manage population growth, develop communities and boost facilities in a given area. The average salary for planners was $65, 230 as of May 2012, according to the U.S. Bureau of Labor Statistics. The salary range is $41, 490 to $97, 630. On the other hand, the American Planning Association cites the average salary as $71, 000 in a 2012 salary survey. Those with less than three years experience make an average of $45, 000 annually.

Related Reading: Careers for a Bachelor of Arts in Social Science

Environmental conservation officers are charged with protecting the environment and natural resources. They look into complaints about violations of conservation laws, and teach students, service groups and other local organizations about environmental policies. Trainees in the state of New York initially make $53, 304. Once the employee has completed her two years of training, her salary becomes $60, 769. Conservation scientists overall make an average of $61, 100 per year; with federal employees drawing an average of $71, 110; state employees earning $53, 310; social advocacy positions netting $52, 820; and local government workers making $51, 230.